Imagine if we could test our target audience's change resistance levels as easily as conducting a home pregnancy test.

In this article, I am unraveling the authentic nature of the thing we call ‘resistance’. It turns out that our ability to discern four types of resistance is a key success factor for organizational change practitioners. Each type requires a different response, so a tool as simple and straightforward as a resistance 'pregnancy test' would be quite handy.

First things first… how did I come to this crazy idea? I used to think that resistance in projects was a behavior that is recognizable from miles ahead: angry people being explicitly opposed against an initiative. Textbooks on change management make us believe that resistance is easily observable and that we can almost tick the check-boxes like a scientist observing an animal in the zoo. You can imagine my frustration when I got my fingernails dirty on projects. But if textbooks weren't going to help me, I had to figure it out for myself. Bear with me as I show you with the precision of an ultrasound display that it is worthwhile to perform a 'change resistance pregnancy test'.

As with the pregnancy tests you can buy at a pharmacy, you will be surprised by the accuracy of just looking at two simple things:

Let’s take a closer look. In the ultrasound display below, the vertical axis displays intent and the horizontal axis shows behavior. As a result there are four quadrants: 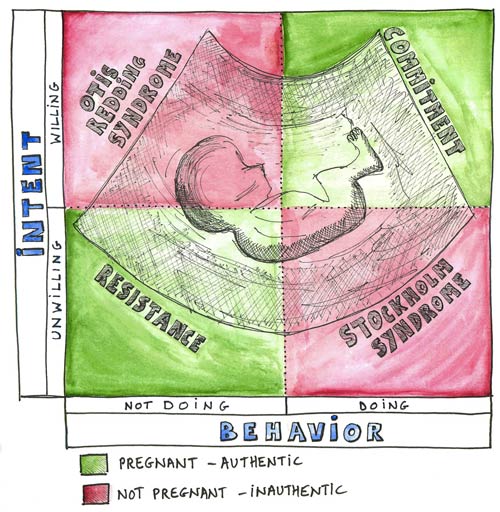 The Four Quadrants of the 'Ultrasound'

What happens when our intention is willing and our behavior follows our intentions. Let’s say this is an authentic ‘yes’.

What happens when our intention is unwilling and when it is in resonance with our behavior. Think about the common types of resistance that can be ticked in a check-box. Typical examples include: Need more detail, Giving a lot of detail, Not enough time, Impracticality, Confusion, Silence, Moralizing and Press for solutions (taken from: Peter Block – Flawless Consulting). The point is that these behaviors demonstrate a ‘no’, but it is an authentic ‘no’.

Both of the above behaviors are signs of pregnancy because they are authentic. Authenticity means that what people do is in sync with what people say. Resistance, like commitment, is a rare behavior. It requires people to be open about what they care about, and at the same time it goes against what is generally accepted. It takes maturity and courage behave in sync with your intent when the social pressure to conform is high.

So far the stuff I could find in textbooks. My gut-feeling says that it covers about 10% of the behavior I come across in an organizational context.

But it gets more realistic when there is a dissonance between what people say and what they do. 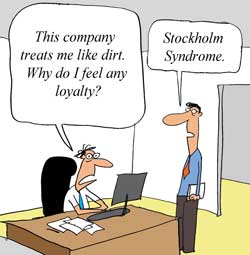 The Stockholm Syndrome – also known as ‘capture-bonding’ - describes the behavior of hostages who become sympathetic to their hostage-takers. The name is derived from a 1973 hostage incident in Stockholm, when several victims began to identify with their hostage-takers as a coping strategy. It is the same kind of fear of repercussions that we can find in some organizations. People lose their sense of self as if they were in a hostage situation and start to act against their unwilling intent. From the outside they gladly execute and commit to the commandments that were made, so their behavior is a false ‘yes’.

I borrow this one from Bob Sutton, who recalls the line from Otis Redding’s old song: Sitting By the Dock of the Bay, “Can’t do what ten people tell me to do, so I guess I’ll remain the same”. Clearly, this describes people with a good intention who are somehow hindered to follow their will because they are paralyzed by opinions and politics. This is a false ‘no’. Otis Redding’s solution was to “remain the same” because he couldn't please 10 different people. According to Robert Sutton, that is a rational response to a bad system.

In both of quadrants 3 and 4, the behavior and the intent are not in sync; hence I label them as ‘not-pregnant’. Sadly, the inauthentic behavior of these quadrants represents about 90% of resistance we encounter in an organizational context.

So now that you know what to look for we can get down to practice. Intent and Behavior can be in sync or out of sync. It’s all a matter of authenticity – something you can easily diagnose by the level of energy that people display.

The level of energy that people display is something we can pick in the interaction and our interventions. It helps to be humble in our interventions in order not to distort the resistance we are measuring (is it against us or against the initiative?).

By now you will have figured out that I will advise a different approach when the diagnosis is pregnant versus not-pregnant.

Authentic behavior is a source of energy. Most of the times, people are being authentic because it feels safe enough for them to turn their emotions into energy. That is why, from a fertility point of view Resistance and Commitment mean the same:

In both cases the challenge ahead of us is a nurturing challenge. We need to find a way to channel the energy and provide a context of involvement and sense-making.

Resistance, like commitment, is a good thing, although it can lead to a troubled pregnancy if our response is negative. Think about it: fighting resistance is a form of contraception. You are giving up on the life and you have decided not to create a context for this life to unfold. For sure you will be right when the pregnancy does not come to fruition. But who’s to blame?

Not Pregnant: A Fertility Problem

In management, like in medicine, syndromes are mostly conditions that require an outside intervention in order to heal. Something needs to happen before you can think of nurturing. The problem with inauthentic behavior is that there is no context to make sense of the emotions, and thus no fuel. What we see as a result is an alien life-form, as in: alienated and outside of the womb. No nurturing is possible when fertility is the problem.

Solving this fertility problem is the real challenge that organizational change practitioners should focus on. For the biggest part this is uncharted territory because 99% of the practitioners I know make a living out of ending difficult pregnancies (and claiming they did the right thing).

Real change management is the true work of preparing a womb where behavior can be authentic in the first place. Create a context where a ‘problem’ can be a ‘problem’ so we can deal with it without being swept under the carpet.

Have another look at the quadrants of the ultrasound above. Our challenge is to create a context of fertility in the first place. Often, this means provoking people into an authentic position of resistance. Always remember that resistance means that people care. When you have heartbeat on the monitor, that’s when you can start the nurturing.

Whose Baby is it Anyway?

When I look around me I see to much practitioners aborting a pregnant situation and even more practitioners nurturing inauthentic syndromes. That needs to stop.

In any project the transfer of ownership of the end state is an awkward thing. In the business world we have gotten used to pregnancies outside of our womb and forced parenthood of someone else’s baby. That is why we need instruments to test authenticity in the first place: to separate nurturing challenges from fertility problems.

Anyhow, the earlier you can get a hold of that pregnancy test or ultrasound image, the better it is. So get out there, be humble in your interventions and let the diagnosing begin!

Luc Galoppin is a Belgium based organizational change practitioner. He is the founder & community Manager of 'Organizational Change Practitioners', the world's largest change management forum. He can be contacted at luc.galoppin@reply-mc.com.

What are your experiences dealing with change resistance?
Leave your comments below!